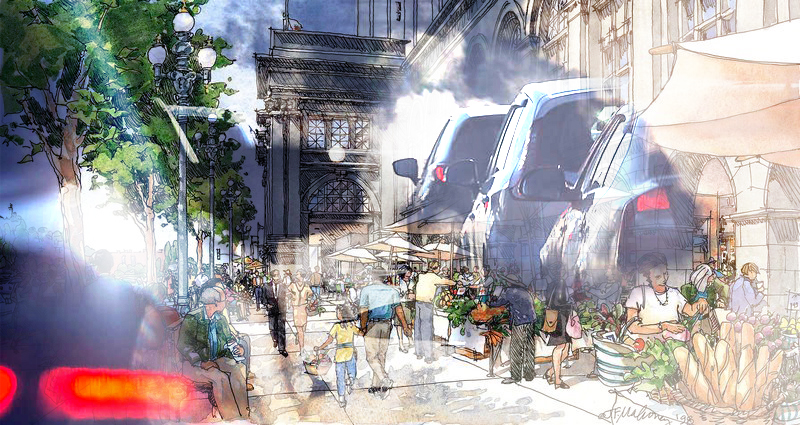 The pandemic caused us to take notice of many things around us and to reassess them with fresh eyes. One of these was our use of urban spaces. For a brief, blissful moment, there was a huge reduction in the traffic flowing around cities and people headed to parks and green spaces in droves.

The pandemic caused us to take notice of many things around us and to reassess them with fresh eyes. One of these was our use of urban spaces. For a brief, blissful moment, there was a huge reduction in the traffic flowing around cities and people headed to parks and green spaces in droves.

However much we might rely on cars, the peace and quiet was a welcome break from the norm of traffic jams, congestion and pollution, and it has chimed with ongoing discussions about efforts to reduce congestion, limit carbon emissions and reclaim the city from the car.

What happened to the public realm?

The conversations around the right approach to creating public realm – described by the London Mayor’s Design Advisory Group (MDAG) as “the spaces around (and sometimes within) buildings in which we can go to and fro, meet people and enjoy the city” – are not new.

Back in 1997, Richard Rogers wrote in Cities for Small Planet: “Most of our public parks, squares and avenues are bequeathed to us from previous centuries. In this modern age of democracy one would expect many more important additions to the public realm, but in fact our contribution appears to be the erosion of these spaces by traffic and personal greed. The public realm is being restricted by the overbearing presence of security, the imposition of entrance fees to cultural institutions, the decline of public amenities and the dominance of the car, which reduces public spaces to narrow pavements. And buildings are being designed as if they were stand­alone objects, rather than elements that enclose and shape the public realm.”

The pandemic has accelerated our engagement with the public realm. The past 18 months have shown that outside space is more important than ever, and it has become an integral part of pandemic life. As The London Plan 2021 puts it, “The quality of the public realm has a significant influence on quality of life because it affects people’s sense of place, security and belonging, as well as having an influence on a range of health and social factors.”

In the UK, some city councils are attempting to reduce the number of vehicles in our city centres, with many cities introducing or trialling Clean Air Zones (CAZ): Bath and Birmingham’s CAZ are live now, while CAZ will be introduced in Bristol, Bradford, Leicester, Manchester, Newcastle, Portsmouth and Sheffield later in 2021 and 2022. London will be expanding its existing Ultra Low Emission Zone (ULEZ) in October 2021.

Design and architecture, too, have an important role to play in creating public realm spaces. Around the world, several interesting examples and initiatives in public realm design are in progress; designed to drive cars out of city centres and to encourage people to move around them.

Residents of Stockholm are being asked to help redesign the urban spaces right outside their front door. Pre-built furniture modules are replacing parking spaces with tables, benches and plants. It’s part of a government initiative to help people improve the immediate environment around their homes. In trial installations in Sweden’s capital, consultations with local communities are determining the use and configuration of the units. Further sites in Gothenburg, Helsingborg, and Malmö are in different stages of completion. This hyperlocal approach to planning is built around the concept of the one-minute city, a movement that wants people to make small, achievable differences that will add up to something bigger.

Similarly, in Paris, authorities have announced that some 70,000 surface parking spots (half of the street parking spaces in the capital city) will be gone by 2025. This will free up space, particularly on narrow and residential streets, for more eco-friendly transport options and leisure pursuits, making local neighbourhoods greener and more liveable. The deputy mayor in charge of the initiative commented, “We can no longer use 50 per cent of the capital for cars when they represent only 13 per cent of people’s journeys.”

In the UK, the London Plan 2021 sets out a framework for how London will develop over the next 20-25 years. The Public Realm policy section states that development plans and proposals should not only, “encourage and explore opportunities to create new public realm where appropriate” but also, “maximise the contribution that the public realm makes to encourage active travel and ensure its design discourages travel by car and excessive on-street parking, which can obstruct people’s safe enjoyment of the space. This includes design that reduces the impact of traffic noise and encourages appropriate vehicle speeds.” There are many more recommendations: have a read of ‘Policy D8 Public Realm’ if you’re interested in the proposals for our capital city.

Local plans for the public realm

We can already see smaller examples of public realm being incorporated into developments closer to home. In Cheltenham, a design proposal for a new plaza space at the Quadrangle that will improve the relationship between the 1970s landmark and Imperial Square Gardens has been approved by Cheltenham Borough Council. Architects and landscape architects have developed the new plaza plans, creating a softer edge between the Quadrangle and the Gardens, helping to further open up the space. The plaza will retain external seating areas for ground-floor restaurants from the original plans but will now also incorporate new landscaping to create a greater connection between the two spaces.

The Lightwell is a residential development, designed by architects Glancy Nicholls, to capture and celebrate the spirit of Colmore Business District. Surrounding a central courtyard, or ‘lightwell’, this focal point captures the light and space of the development. It sits within the Snow Hill Public Realm programme, being delivered by Colmore Business Improvement District and Birmingham City Council. The programme includes several projects to improve public transport interchange and connectivity, enhance the public realm and prioritise pedestrian movement, reallocate the unused on-street parking and encourage on-street activities.

In Bristol, there are several residential and commercial developments which have incorporated the public realm into their masterplans. Brabazon will be an entirely new city district and home to Bristol’s new Arena. Landscape architects Grant Associates have worked with architects Allies and Morrison on the masterplan and developed the overall landscape and public realm strategy for the scheme, which will incorporate commercial and leisure spaces and a generous network of open spaces, as well homes and schools, to create a new town centre.

In the city centre, The Soapworks is a new vibrant and inclusive district, located in Broad Plain, which will combine retail and commercial space, an independent food and drink offer, and new homes. Its inclusive public open space will be open to all, with improvements to the surrounding public realm and the creation of new pedestrian and cycle links planned. Similarly, commercial waterfront development Assembly Bristol places public realm at its heart, with spectacular new waterfront spaces for all to enjoy. The Broad Plain strategy area is undergoing rapid social and economic change as new development transforms the area into a flatted, residential quarter. The strategy aims to maximise the opportunities presented by the regeneration of the area and will support the community vision for an attractive central neighbourhood with convivial public spaces and people-friendly streets that is not dominated by traffic.

As our consideration of what a good work-life balance looks like has shifted over the past 18 months, so cities and their developments need to reflect this. How do you think we will see cities evolving as we transition to a new normal?